Philippine economy is seen to recover starting the third quarter but still not enough to reach the government target of 6.0 – 7.0% growth this year.

Growth is expected to clock in at 6.1% in third quarter and 6.4% in the fourth quarter, lower than the growth recorded for the same periods last year. According to the Philippine Statistics Authority (PSA), government spending expanded only by 6.9% in 2019 of second quarter compared to 11.9% from 2018 Q2. Recall that it was only this April 15 that President Duterte has signed the 2019 budget into law. It cost the government about an estimated Php1 bn per day spending for the first quarter because of the late budget passage.

State spending accelerated in third quarter due to the government’s effort to catch-up with its expenditure. Expenditures jumped 39.0% to Php 415.1 bn in September, the fastest growth for this year. However, according to the Department of Budget and Management (DBM), end of August public infrastructure expenditures declined by 11.8% to Php 446 bn from Php 505.6 bn during the same period last year.

On the other hand, government revenues increased by 16.9% year-on-year to Php 236.5 bn from Php 202.4 bn due to higher imports and collections from the Tax Reform for Acceleration and Inclusion (TRAIN) Law, Rice Tariffication Law and National Food Authority tax expenditure collection. 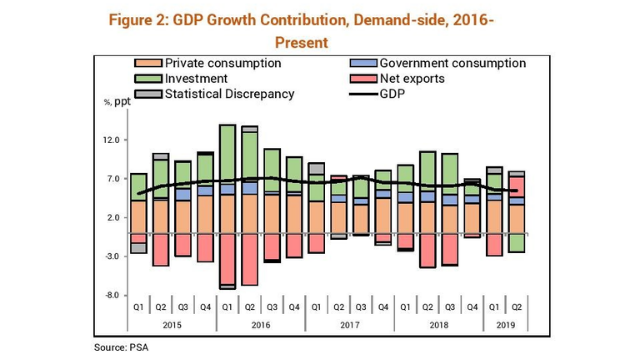 Household spending likewise declined to 5.6% from 6.0% in the second quarter of 2018. However, consumer spending is likely to increase in the third quarter of 2019 due to inflation deceleration, low inflation rate, and higher OFW remittances which help boost consumption. The Q3 Consumer Expectation Survey showed that overall confidence index (CI) of 4.6% marked the best result since the fourth quarter of 2017.

Trade will remain a pulldown to growth as both exports and imports fall due to subdued investments in emerging markets coupled with persisting trade tensions. On the supply-side, industry declined to 3.7% in the second quarter of 2018 from 6.5% of 2018 in the same quarter. The Domestic manufacturing performance weakened in August largely due to the lower output of products. This marks the 8th consecutive month of declines for this year. Fast-tracking the implementation of the infrastructure programs might help the sector recover amid a less optimistic business outlook.

Agriculture, meanwhile, slightly grew at 0.6% in the second quarter of 2018 from 0.3% in 2018 of the same quarter. Growth in this sector still poses threat due to the delayed implementation of the supposed benefits from the tariffication law and the entry of African swine fever.

Services had the fastest growth at 7.1% coming from 6.7% in the same period last year. This sector will continue to drive growth fueled by the expanding financial services and tourism.

Economic growth is expected to have been driven by the robust remittances, improving employment, and benign inflation. Improvement in government spending is a critical growth driver. However, Economic Research Unit still thinks that it will be difficult to reach the set government target. 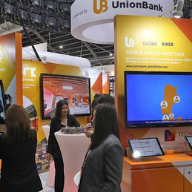